Are you of legal drinking age
in the country where you are right now?

SORRY, YOU ARE TOO YOUNG TO ENTER THIS SITE

What makes something rare? And what does rarity make something?

The world of Scotch whisky is built on the very essence of rarity. It is a place where spirit is made, deliberately for loss. Where the angels’ share is celebrated; angelic heavenly hosts turning their usually kind hand to thievery, and not only getting away with it, but being positively encouraged in the act.

Scotch is rooted in sacrifice, with distillers having to plan decades in advance, knowing that the bulk of what they make today will not be there tomorrow, all for the benefit of what remains, with the distinct understanding that what is left behind is there for us to enjoy. The rare spoils of long maturation.

What makes Scotch whisky rarer still is the diverse and interesting number of small, farmhouse style distilleries that are dotted across the country, each of which produce a unique single malt whisky, in batches, on copper pot stills.

These distilleries all exist as part of wide network making malt whisky mostly destined for blended Scotch, the coming together of a variety of styles from small distillers, woven together with grain whisky. The skills of the malt distillers are evidenced in their final product, driving a unique flavour and DNA into their whisky, which in turn is utilised by master blenders in crafting excellent blended Scotch whiskies.

It is this craft of combining whisky from multiple distilleries, that gives us ‘blended Scotch’, the counterpoint to ‘single malt’, the product of a single distillery.

However, occasionally there are malt distilleries that choose to do things differently, to eschew the modus operandi of the traditional whisky producer. The result is always left-field, often groundbreaking and occasionally outstanding. When these three elements are combined, true rarity is achieved. Such is the case with the House of Hazelwood’s A Singular Blend. 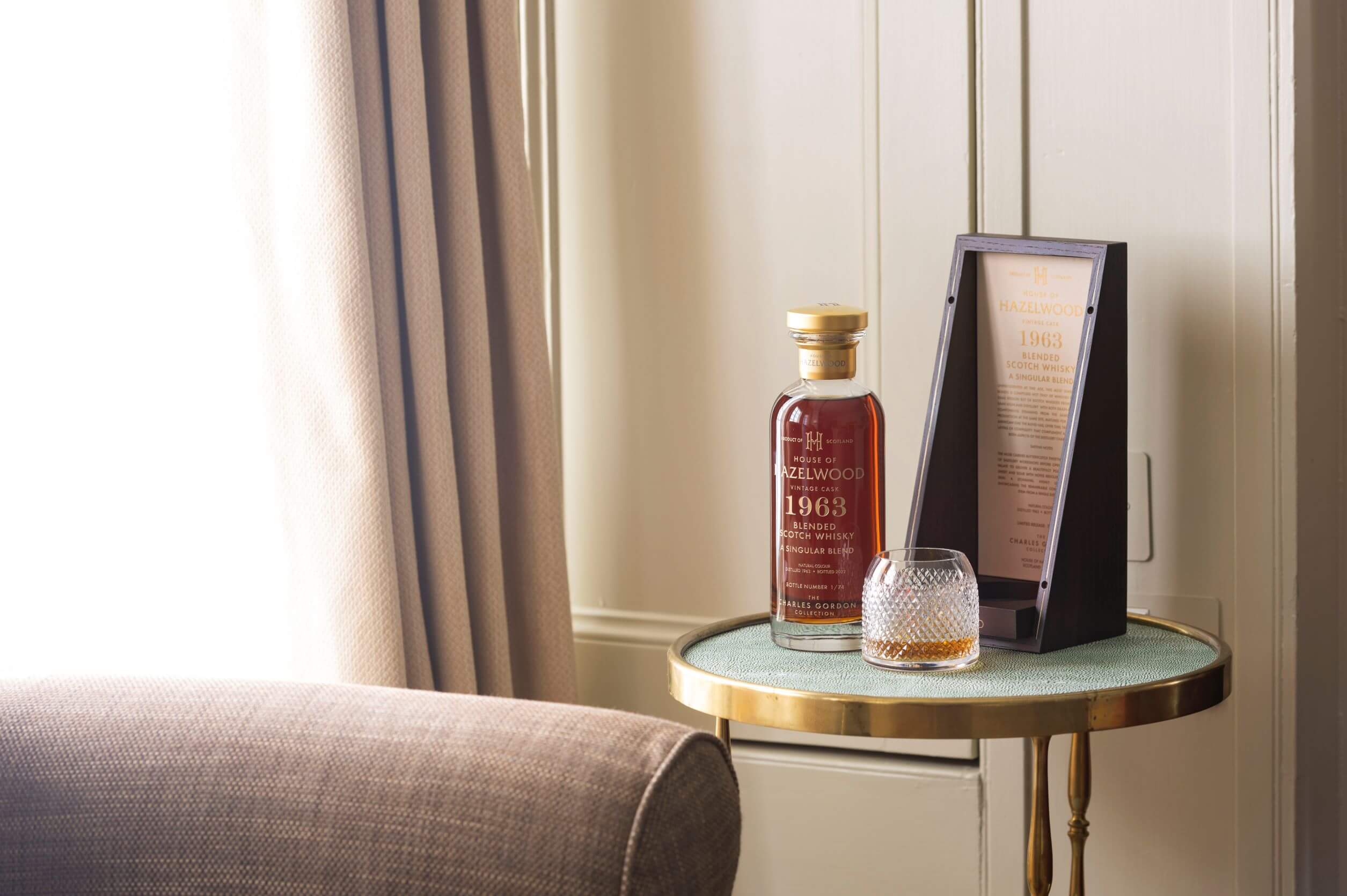 Unusually, A Singular Blend combines both malt and grain whisky distilled at the same site, under the banner of one distillery. A highly unusual practice even within the rich historical archives of Scotch production. What adds scarcity to this Scotch, is age. Both the grain and the malt from this one distillery were produced in the same year, 1963 and matured in American oak for 58 years. The legacy of this unusual practice, now no longer employed, as well as extra-long ageing, is an outturn of just 74 bottles of A Singular Blend. Rarity, now an understatement.

Yet, this is merely the start of the story, for hidden within this bottling is a tapestry of taste, that shows off rich Manuka honey, royal jelly and butterscotch on the nose, leading to a palate that has waxy fruits, hints of blood orange, oak spices and banana bread. The finish is long and lingering with oud, liquorice and blackcurrants.

These complex and rich flavours are the fingerprints of the Highland distillery at which this unique practice of making both grain and malt whisky was employed, over half a century ago; the name of which is veiled. This final twist in the tale, a hidden name, is common for whiskies curated and bottled by those from outside the distillery walls.

Far from heightening suspicion, it adds intrigue to the story, and begs the question of where this might have been made; who, in the middle of the last century, was employing such unusual, interesting and creative techniques in the traditionally stoic Scottish Highlands? More importantly, how has this singular blend developed during its extraordinary 58-year slumber?

The answer, as with all good riddles, is hidden within, locked away in the history of Scotch whisky itself, and wrapped up in true rarity. We are back to the understanding and wisdom of the Scotch whisky maker, that enjoyment is found in what is left behind.

In A Singular Blend we are lucky that liquid from a practice now ceased has been left behind by both Scotland’s whisky-makers and the angels, for us to enjoy as a true one-off bottling. This really is rarity captured, and rarity revealed.

From press reviews and exclusive private tastings to details of our newest releases, learn more about the people, places and remarkable partnerships that make House of Hazelwood all it is today.

Explore more about the influence of ex-Sherry casks on maturing Scotch whiskies.